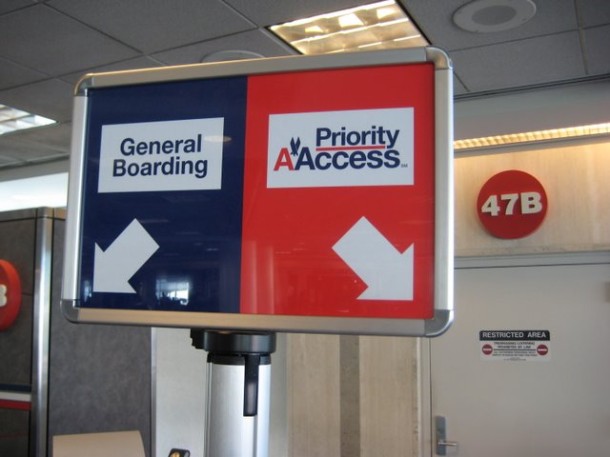 A couple of weeks ago, I flew out of Columbus, Ohio on American Airlines. I was connecting in JFK, and since I had a tight connection time (gotta have words with my travel agent on that) I was getting concerned because the incoming aircraft had not yet arrived, and boarding time was approaching.

I walked up to the gate agent to see if he had information on how late we were going to be. The agent, Scott, from his name tag, gave me the information I needed. First, that the incoming aircraft was approaching the airport and would be landing shortly. Secondly, he assured me that he would personally do everything he could to assure a quick turnaround of the plane. On a side note, he said we were getting a fresh flight crew and all of its members were present and checked in. And finally, he said that he would monitor the situation for me and if necessary, see what could be done if my connection seemed in jeopardy. Then, he said he was happy that I was on his flight, and said he was very good at getting it turned around quickly and efficiently.

On the surface, this is a level of service and concern for a paying passenger that should be baseline from any customer service employee. We all know, though, that such is seldom the case.

The incoming flight arrived and Scott, true to his word, made sure that boarding was fast and efficient. I think we finally departed less than 15 minutes behind the scheduled time. In JFK, the connection was not a problem, though a walk from one Jetway directly onto the next is never what I would call a “comfortable” connection.

Nonetheless, I kept thinking about Scott, and his attitude toward me and toward his job. He took ownership of my concern, affirmed a commitment to help the situation and shared his pleasure that I was flying AA and letting him work for me during this small phase of my journey. It was just a few sentences exchanged, on a “problem” that never really materialized. But Scott was in charge of that gate with an attitude as if he were the CEO of the airline.

This site uses Akismet to reduce spam. Learn how your comment data is processed.