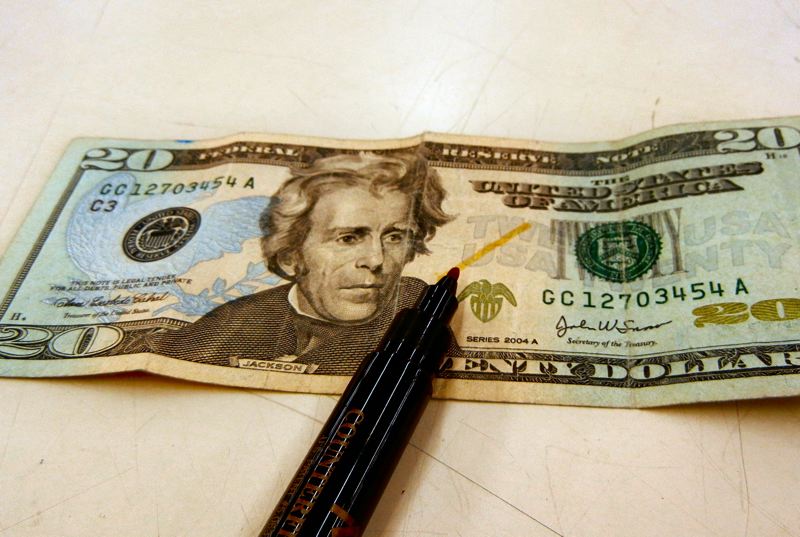 I wonder how many counterfeit twenty-dollar bills are really caught by those “detector” marker pens that seem to be at most retail check-outs these days? Not many, I’ll bet.

We were in Target the other night and I paid with a twenty. The clerk took my money, put it in the drawer, swiped The Pen on it, and proceeded to make my change. To my observation, the drawer was closed far too quickly for the cashier to have really taken a look at the mark on the bill.

If my bill had been counterfeit, the most likely scenario is that the bill would have been accepted unchallenged by the cashier, and then given out in change to the next customer who paid with a larger bill and needed a twenty in change.

These pens, as used, fall squarely into the category of False Security. The retailer thinks they are being protected against counterfeit bills, but the way the pens are used doesn’t really provide the desired protection.

I wonder what happens in the case where Alice hands the cashier a fake bill, The Pen is used and the (undetected) fake bill goes into the till. Bob is the next customer in line and is given the bill in change. Is the store guilty of passing counterfeit money? I am not a lawyer, but it seems to me pretty obvious that the store would be found guilty.

Does the store assume greater responsibility (and thus liability) by using the pen? Would the store be better protected by not using the pens at all if they are not actually stopping cashiers from accepting bad bills?