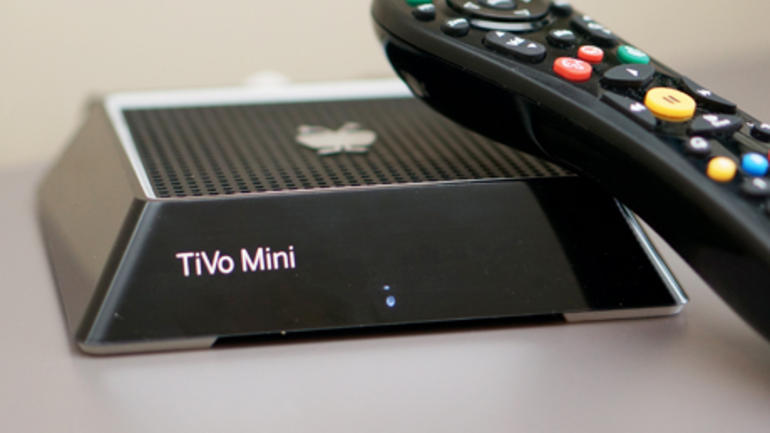 In Part 2, I wrote about my quest for a decent-sounding audio system that was simple to install and wouldn’t break the bank. The Samsung TW-J5500 powered tower system was my eventual choice. In this concluding article of the series, I praise my TiVo and how it is the ideal video source for my project.

I’ve been a TiVo fan and user since 2006, and have progressed through three generations of TiVo hardware. The TiVo Roamio DVR we now use has just about every feature you could wish for in a DVR. With the Roamio, I can record up to six shows at the same time; I can stream video and photos from my PC; I can remotely watch my recorded TiVo programs on my tablet or smartphone. The latest software updates to TiVo provides a “quick mode” which speeds up playback of recorded shows by 30 per cent without significantly altering the audio pitch, and commercial skip, which allows us to skip entire commercial breaks on many popular shows with the press of a single button.

TiVo Mini: The Next Generation

When looking at video sources for the budget home theater, I remembered reading about TiVo Mini, and decided to give it a try. The TiVo Mini is a small streaming unit that extends the functionality of a TiVo DVR to another TV (or in my case, a projector) in your home. The TiVo Mini requires a wired network connection, either Ethernet or MoCA. MoCA stands for “Multimedia over Cable Alliance” and is an industry standard for sharing cable wiring between cable TV signals and data traffic. I do not have an Ethernet connection near the home theater, but there is an existing cable TV run to that room, which is all that the TiVo Mini needs. My TiVo DVR, a Roamio Pro model, has an internal bridging adapter that creates the MoCA network over the existing cable TV wiring.

Basic installation is a snap. First, you go to the TiVo DVR and create a MoCA network. Then, you connect the TiVo Mini to the coax, and when it powers up, it discovers the MoCA network that you just created. Running initial setup on the TiVo Mini takes a few minutes, during which a software update is done if needed, and the Mini becomes an extension of the host TiVo DVR. The Mini comes with the familiar TiVo remote, and it operates just like the host unit. We can watch live TV streamed from the Roamio to the Mini, as well as shows we’ve recorded on the Roamio. All the streaming services that TiVo supports are available on the Mini, but the service, e.g., Netflix, sees the Mini as a separate device, so you will need to login with your credentials for each streaming service that you want to use with the Mini.

A highly-recommended final step is to install a point-of-entry (PoE) filter where the Cable TV line enters your home. MoCA puts Ethernet data on your Cable TV coaxial cable, and the PoE filter keeps that data from possibly being received by your neighbors.

My Epson projector has two HDMI inputs. Switching between them is easy, using either the remote, or buttons on top of the projector. The TiVo Mini is our most-used theater source, supplemented with a Blu-ray player on the other HDMI input. I also have a Roku streaming player for channels that are not available on either TiVo or the Blu-ray player.

(Update: The newest version of the TiVo Mini is smaller and includes a remote that has a “voice control” feature, plus a dedicated “Netflix” button.)

Our theater for two was completed with matching power recliner chairs and some cinema-themed wall decorations. Since installing it, we’ve enjoyed it more than any traditional theater experience, short of Imax or Omnimax. Both our Blu-ray player and Epson projector are 3-D capable, so investing in some 3-D glasses may be our next addition to the setup.