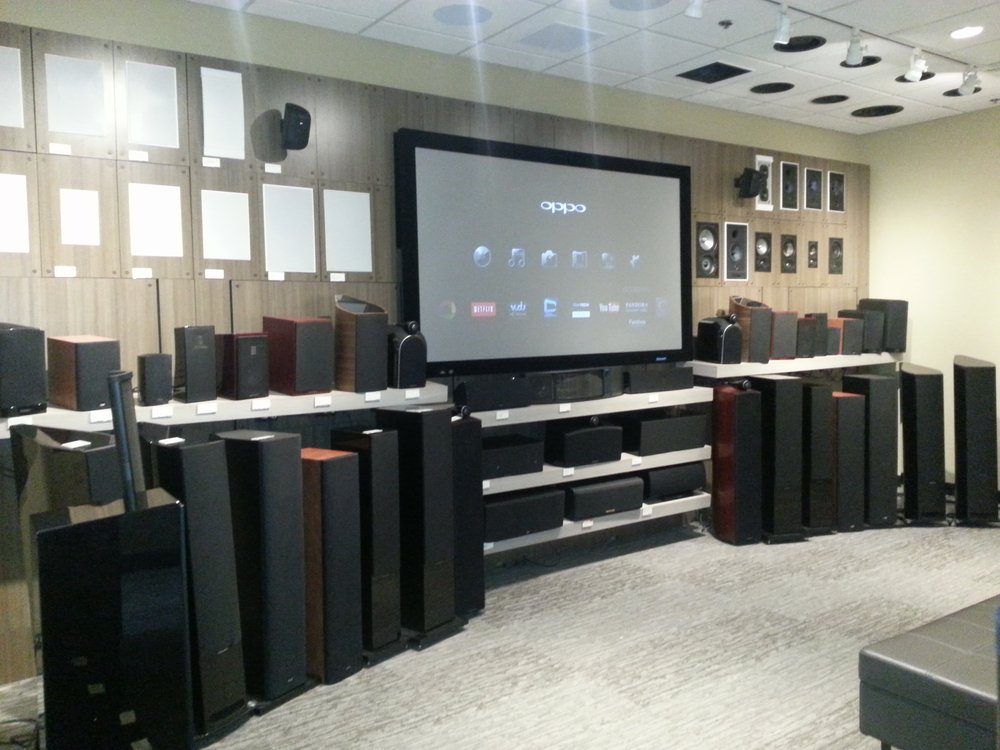 In Part 1, I wrote about my plan to build a simple home theater on a budget and my process of selecting a projector and screen.

This time, the topic is sound. I found out quickly that using the right terminology is very important in searching for audio equipment. In audio, the term “home theater” almost always means a receiver, a set of surround speakers with a powered subwoofer, and sometimes a Blu-ray player. This setup didn’t fit the vision I had for the room because of needing a receiver (which I had already ruled out), and the difficulty of placing and wiring speakers all around the room. For the types of movies and TV shows we watch, we don’t really need the surround sound experience, nor the thundering bass that Hollywood loves to use for explosions, earthquakes and dinosaurs!

I stopped looking at home theater systems, and switched my quest to “soundbars” and similar products. A soundbar is a one-piece powered unit made to sit below a video display. It contains stereo speakers and sometimes comes with a separate subwoofer. I didn’t like the looks or the sound of most of these that I researched, but an unconventional system by Sharp caught my eye. The Sharp HTSL-75 is a soundbar with a difference. The “bar” can be split in two, and each half mounts on a sleek, modern-looking pedestal to flank the screen on both sides. The system had a list price of $350, but the retailer was offering a deep discount on an open-box item plus a no-hassle return policy, so I ordered it.

The Sharp product looked, well, sharp, but the sound was a huge disappointment. The audio was thin and weak, more suitable for a dorm room than anything resembling a theater.  There was also no unity in the sound. I could hear the pedestal speakers and I could hear the sub, but there was no sense that the various parts were playing on the same team. The Sharp system also lacked the power to deliver adequate volume to the room. It was a no-brainer to ship it back.

A few days later, we were out, and the woman who I promised to love, honor, cherish, obey, and take her audio advice said, “Why don’t we see if Sears has anything that might work? They still have an electronics department, don’t they?” I honestly admit that I had no hope of finding anything remotely interesting at Sears, but since we were there, we walked in to take a look and listen.

Long story short, we drove home with an audio system! The Samsung TW-J5500 Sound Tower system has exceeded my expectations in every area. First and foremost, the speakers sound great. The system consists of two towers, each with a high-frequency horn, midrange driver and dual ported subwoofer. Samsung calls this a 2.2 design. One of the towers contains a 350 watt amplifier, the informational display and all of the connections. Installation is extremely simple. Just plug the powered tower into an AC outlet, and connect the passive tower using the included cable. For my setup, I bought a long audio cable with a 3.5mm stereo plug on each end to go from the projector to the powered tower.

The sound is smooth and powerful across the entire listening range. The amplifier power is well matched to the capabilities of the speakers themselves. There is deep bass that’s there when you need it, but isn’t overpowering. High frequencies from the top-mounted horns are also crisp and well-defined. Dialogue, music and special effects in the movies we’ve watched are all well balanced. The speaker towers have a modern, high-tech look, with exposed speaker cones for the midrange and subwoofer drivers. There is enough power from the amplifier to deliver theater-like volume levels, but you won’t be shaking the house with these.

The system has traditional phono plugs for audio input, plus an optical input and a 3.5mm stereo jack. There are two USB jacks for playing your favorite music from a memory stick, and as a bonus Samsung has included Bluetooth audio connectivity. Though I’ve never tried it, the documentation says there is an FM Stereo radio in there, too!

List price according to Samsung is $450, but at the time this is written, Amazon is offering the set for just over $300.

(Update: Since I originally wrote this, Samsung has discontinued this model. The Amazon link above is for a refurbished set. The good news is that the “powered tower speakers” category has exploded in the past few years. A quick search of online shopping sites lists products from most high-end audio brands that should suit your needs well. As always, shop around for the best deal.)

Overall, I couldn’t be happier with the sound quality and versatility of this audio system, and it looks great in our theater room. If I had to find anything to gripe about, I found it odd that the tower with the inputs, amplifier and electronics is hard-wired to be the right channel speaker, and that can’t be changed.