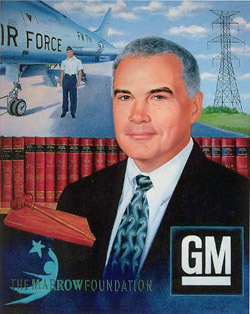 In November 1992, NBC News did a hatchet job on General Motors during an episode of its “Dateline NBC” program. The key element in the hour-long report was a staged crash of a car into the side of a GM pickup truck. The car hit the truck squarely and a fire erupted from the area of the truck’s gas filler cap. NBC claimed that the positioning of the gas tank made it vulnerable to rupture and spilling fuel in a collision. The report went on to claim that the exposed filament of the collision car’s headlight sparked the gasoline fire. The report was no doubt launched due to prior lawsuits brought against GM by families of people who had died or been seriously injured in crashes involving GM trucks.

Harry Pearce had a bigger hatchet. He was then Executive Vice President and General Counsel for GM. At a press conference broadcast by satellite the following February, he conducted a calm, methodical take-down of the lies and misrepresentations that filled the NBC report. Subsequently, heads rolled at NBC News (including the news division president) and the network issued a rare retraction of the story and apology to GM.

A recording of the press conference is available to view or download from the Internet Archive.

You should watch it. Pearce is a top attorney, and this is a mesmerizing two hours witnessing him destroy the credibility of the organization that had set out to destroy his. I have read a lot about this story and its aftermath, and no reporting that I’ve seen comes close to capturing the devastation that Harry Pearce wrought against NBC’s “reporting.”

As in any profession, there are good lawyers and bad ones, and we can argue which is which. But watching Pearce do what he did to NBC’s reporting and reputation, without visible notes, using mainly an easel and poster-boards, left me certain I’d witnessed a legal tour-de-force like few others.